The Los Angeles County Superior Court Probate Department has jurisdiction over conservatorships. As a mental health therapist, I have seen that some people need conservatorship and more intensive care as well as management of their person and estate. From what I have seen and know so far, most of the laws governing this type of intervention by the courts are good laws. The problem is who gets to interpret these laws and administer them through the courts!! To make it very plain and straightforward, if judges and politicians are corrupt, everything under them will get corrupted!!

As with my probate trust cases, the conservatorship of my mother was just as corrupt! The main problem was that I had the same judge over the conservatorship as the trust cases. This dirty judge was Aviva K. Bobb. She knew about the crimes committed by my brother and sister and did nothing. She knew that the lawyers were dirty. Especially Daniel Herbert and the so-called court-appointed attorney for my mother, Andrea Van Leesten! The next problem is that probate and conservatorship lawyers want to charge big bucks to represent you. They usually want about $5,000.0 to start. If you have to go to trial, it will cost $10,000.0 to $50,000.00 or much more. Once they start working on your case, they start to play along with the opposing lawyers and the dirty judge on the case like my last lawyer, Frank 0. Fox -State Bar No. 117780  4262 Wilshire Boulevard, Third Floor Los Angeles, California 90010-3505. This will increase the costs for litigation and keep the case going on and on. Many conservatorship cases go on for years!

Unfortunately for me, the co-trustees in my case were able to use trust funds to pay for their lying dirty stupid lawyer Daniel Herbert! I have had to pay out of my own pocket for all of my legal fees to protect my parents’ trusts! My cases should have been shut down a long time ago due to all of the civil and criminal violations by the co-trustees and so-called attorneys! When you tell dirty probate Lawyers and judges that “criminal violations are going on in my case,” they will tell you that probate is civil, not criminal!

My mother, Myrtle Moore, was placed into conservatorship on July 10, 2007, and my brother and sister were appointed as co-conservators of her person and estate by judge Aviva K. Bobb! They did this to keep her isolated in the state of Georgia and to control her decisions by “undue influence”! This was very plain and simple to see at the time if you take into consideration the first accountings of her estate. These fraudulent accountings that the lawyer was producing for my brother and sister Daniel Herbert (State Bar No. 149301) of the MANNING & KASS ELLROD, RAMIREZ, TRESTER LLP law firm located at 801 S. Figueroa St, 15th Floor Los Angeles, California 90017-3012 Telephone: (213) 624-6900, were all approved by a very corrupt judge Aviva K. Bobb. I did file objections to these fraudulent accountings back when they were filed as well as other lawyers that were on the case.

Conservators in California are required to produce accountings of the personal assets and the estate of a Conservatee! The accountings filed by my mother's co-conservators were just as fraudulent as the accountings in the trust cases!! Aviva K. Bobb approved all of them!! To add insult to injury, when the co-conservators placed my mother into conservatorship, they fired her private attorney Martin Reed who had filed a petition to compel proper accountings by the co-trustees. Then Aviva K. Bobb appointed a corrupt co-called court-appointed attorney Andrea Van Leesten for my mother. They refer to them as “PVP” attorneys in the California Probate Courts. PVP stands for “Probate Volunteer Panel.” There is nothing “volunteer” about these so-called attorneys, and they will charge big bucks that are payable by the estate of the conservatee!! All she did was lie to the court and helped to cover up the crimes committed by the co-conservators for my mother, David Moore, and Jean Robinson!!

It took me until November 26, 2012, to get the court to remove my brother and sister as co-trustees of my parents' trusts. I also filed to remove both of them as co-conservators of my mother. They were finally removed by the second judge on my case, Michael I Levanas. Judge Aviva K. Bobb only helped cover up my brother and sister's crimes until they said she resigned from the court. By this time, millions of dollars were stolen from the trusts, and my mother was mentally abused, and both co-conservators neglected her medical care. Both co-conservators took out a reverse mortgage on my mother’s home with no court approval, and it was not disclosed until they were removed as co-trustees in 2012. This resulted in the foreclosure of her home in California. The funds from this sale still have not been fully accounted for!

During the time from 2007, until my mother passed away in July 2017, both co-conservators not only continued to steal and waste her estate but also neglected her medical care and exposed her to psychological abuse. My brother was a medical doctor as well as the co-trustee of my mother. After both co-conservators were appointed back in 2007, they held my mother in Georgia for a while to keep her isolated. She did not want to live in Georgia, so they sent her back to California. She had a condominium in Inglewood, California. My brother lived in Tennessee at the time and stole funds from my mother’s estate to buy a Villa in South Africa. He totally ignored my mother and her health care.

My mother had my two sons living with her to help her with her medical care and daily living. When my brother found out that he would have to act like a conservator of my mother and be present to ensure she had proper medical care, he decided to return to California and act like he is living here.

He decided that he would move into my mother’s home and kick my sons out! On the night of 8/29/2006, he returned to Inglewood, California, to my mother’s house unannounced and started pushing my sons around and telling them they had to move out. Then he called the Inglewood police and reported that my sons were trespassing on my mother’s property, and he wanted them arrested! This attack on my sons was very traumatic for my mother, and she was crying when I got there. She told the police that she did not want my sons to leave! I was able to get an Elder Abuse temporary restraining order against him for this. Aviva K. Bobb did not remove him as conservator, mainly because the court-appointed so-called PVP attorney Andrea Van Leesten only lied to protect him, and my sister did nothing about it! After about a year, he returned back to South Africa again and totally forgot about my mother!

My brother assaulted my sons and made false police reports again in June 2009, and again, I got a temporary Elder Abuse restraining order against him.  When I reported these crimes to Judge Aviva K. Bobb, the court-appointed PVP lawyer Andrea Van Leesten would defend them and recommended that they not be removed as my mother's conservators!

During those years, I got many reports from other family members and friends of my mother that my brother would not allow them to talk to her when they came to visit her at her home. He especially did not let my mother’s private attorney Martin Reed speak to my mother when he came to see her at her home while my brother was there.

I filed many police reports against my brother as well as other family members. I also had reported him to the Los Angeles County Adult Protective Services and they did nothing about it! This was really appalling to me because I was working in the Los Angeles County Department of Children and Family Services (DCFS) in child protective services!!  I will report more details about my experiences with law enforcement, Adult Protective Services, and reports that I made to local government in another part of this series of reports.

After my brother and sister were removed as co-trustees, my brother resigned as co-conservator, but my sister filed in the Georgia court to transfer the conservatorship to Georgia, where they had been holding my mother for years. I filed objections to this transfer, but the court-appointed PVP attorney for my mother told judge Levanas that it is best to allow the conservatorship to be transferred to a Georgia guardianship! Judge Levanas approved this transfer and the PVP in Los Angeles Andrea Van Leesten got off the case!

I filed objections to the Georgia probate court to try to stop the transfer of the conservatorship. The Guardianship in Georgia was not set up correctly, and my sister lied about my mother’s estate to the Georgia Probate Court. In her Georgia probate court documents, my sister reported that my mother had some jewelry and a small checking account. She did not say anything about my mother’s trusts herein Los Angeles or the fact that my sister had stolen funds from her Living Trust to purchase a commercial property in Georgia that was paid for by my mother’s living trust. My mother was on the original title deed to the property and the mortgage.

To add more insults to injuries, the Los Angeles Probate court appointed another PVP attorney for my mother in Los Angeles. This Rat was Samuel Ingham III. He did nothing to stop the foreclosure on my mother’s home in California and lied to the Georgia Probate court that my mother was destitute and agreed to transfer the conservatorship to Georgia! Samuel Ingham took no court actions against my sister to recover the millions of dollars that were stolen from my mother’s trust and reported to the Georgia court that my sister was in “good standing” in the Los Angeles probate case! After the guardianship was finalized in Georgia PVP, Samuel Ingham III removed himself from my case and charged the trust about $18,000.000.

During the last year before my trial on March 24, 2021, I contacted two lawyers in Georgia to investigate the Guardianship of my mother. After I provided them with extensive evidence of felony elder abuse and that the Georgia Probate court should have known about it, they both refused to try to open a case with the Georgia Probate court or came up with an excuse that it will be very expensive and difficult to do. My mother had a court-appointed lawyer in Georgia at the time the Guardianship was approved. I did file solid evidence with the probate court that my sister had been removed as trustee in Los Angeles for her malfeasance over my mother's estate and trusts and was not in good standing. She did nothing about it!

By the time Samuel Ingham and Jeffery Siegel were appointed on my case, I got another judge Lesley C. Green over my case. She was just as corrupt as the judges before her. She only approved anything that the court-appointed temporary successor trustee Jeffery Siegel wanted and denied anything I requested no matter how illegal the requested actions were by Jeffery Siegel. I will go into more details about the next set of judges on my case in part III of the series. 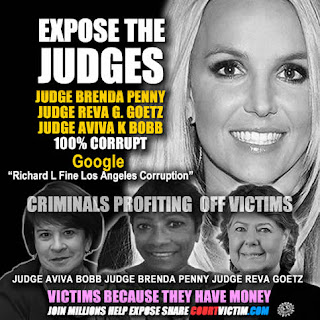 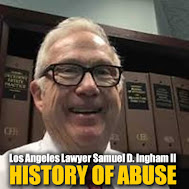 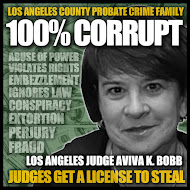 Graphics by: courtvictim.com
Posted by The Justice Channel at 3:57 PM